But my physics/math art curves have often been cut off, like fraying fabric. I have tried to let them taper off smoothly, letting them fade in the dark, but I would prefer closed lines.

The real and imaginary towers have flat roofs. When using software, I tilt the structures, so that the roof is invisible. But the freehand drawing shows it: There is one little last circle high up in the sky, one flat lid closing off the structure, rather abruptly.

Is there a way to ‘close’ the real and imaginary towers in a similar way? 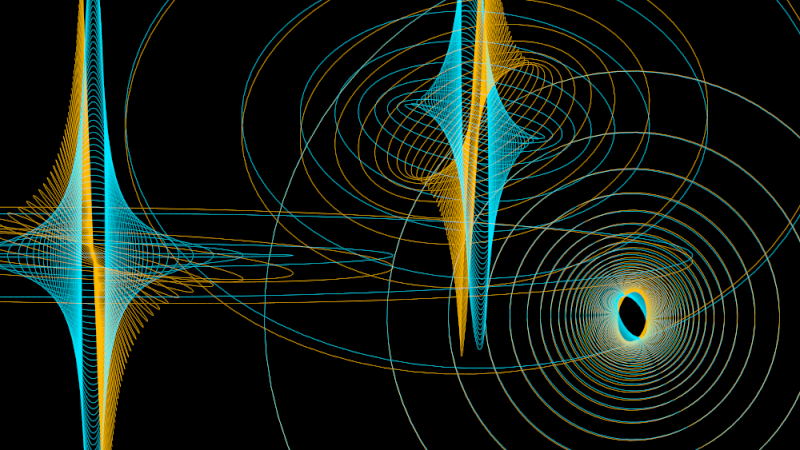 I let go of following the coordinate axes in these three-dimensional spaces! No more curves of constant this or that – as for the temperature waves – and no more contour lines at constant elevation.

I am tracing out the towers again, but now I am following circles centered at zero!

Each of the towers itself can be built from circular discs of decreasing diameter. Stack them upon each other and align points on the circumference.  The towers have vertical inner sides as they touch the vertical axis. But they fade away gently on the other side. Traveling far away from the towers, you feel small bumps only. The trace is a circle (nearly) laid down on the complex plane The smaller your tracing circles are, the more you feel the lifting power of the tower.

These images do not have ‘explanatory power’ of the contour lines. They are confusing. But they are more compact.

They are like alien life forms, like space ships. Signals from such space ships. Beacons of hope, maybe. Confusing, alien, signals of hope in the darkness.

Created with python code, using SageMath. Line is a parametric curves, the parameter being the angle about the vertical axis. The projection of the curves down to the base plane are circles or varying radii.