Creating figures with math software does not feel like fabricating illustrations for science posts. It is more of a meditation on geometry.

I want to literally draw every line. I am not using grid lines or rendered surfaces. I craft a parametric curve for every line. A curve is set of equations. Yet, playing with these equations feels like drawing, not like calculating. For depicting the Elliptical Cone of Stereographic Projection, I craft the sphere, intersect it with a plane, project the intersecting circle down, using projection rays … find a  symmetry axis … intersect … parameterize … until I finally craft all the ellipses. There would be shortcuts, using the elegant way of turning stereographic projection into transformations of complex numbers. But it would not feel like drawing.

Would it add any value, if I used a pencil instead of software? Yes, it does! Here is my geometry of spins and rotations … again (software version here). I am using the techniques of Descriptive Geometry, but freehand. Projections and transformations again, complementary to the equations! I find constraints intriguing: You cannot feed in equations, and then tilt and rotate the image at the end. You draw it over and over to improve incrementally. You learn which parameters – angles, distances – are sensitive ones.  Errors add up, by heaping freehand sketches upon one another. 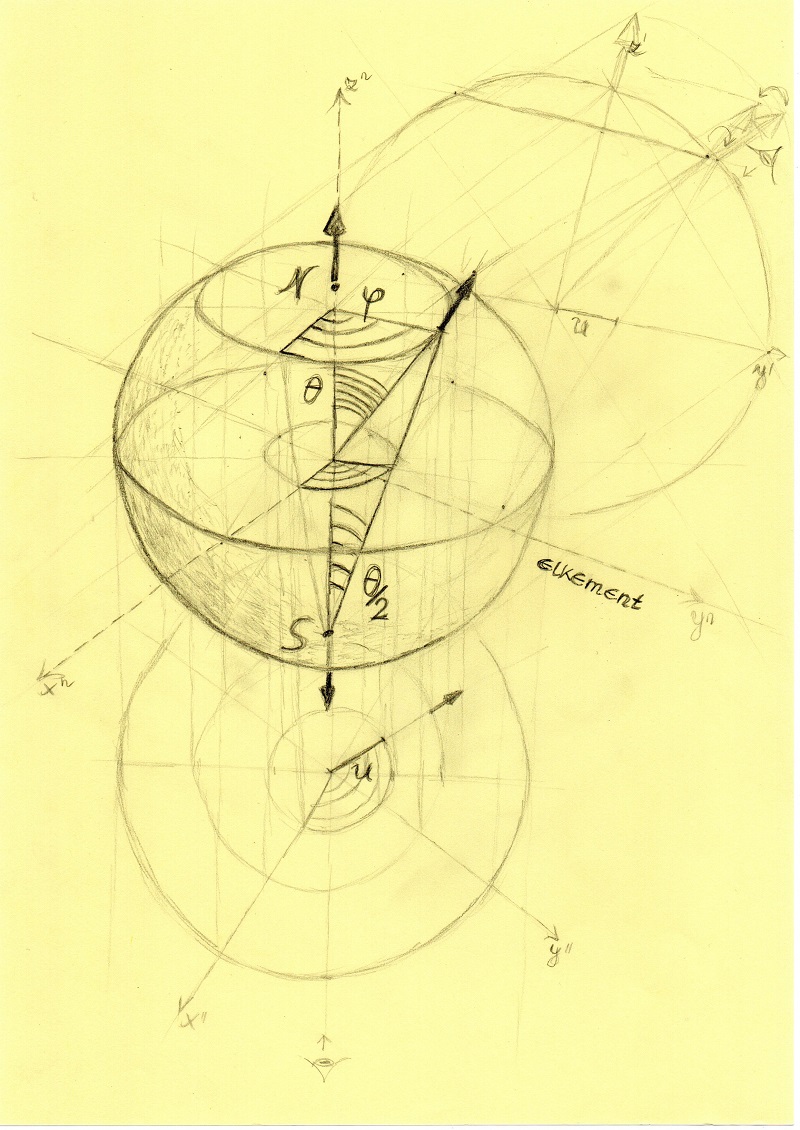 The oblique arrow stands for an arbitrary spin. The quantum mechanical spin state is a superposition of an up and a down state, each multiplied by a complex coefficient. The point on the sphere where the oblique spin sits has two geometric interpretations. The spin axis is tilted by an angle θ. But the arrow’s bottom is also hit by a projection ray of stereographic projection: The line from the South Pole connects the point on the sphere to a point in the equatorial plane. A point in the plane – two real numbers – represents a complex number: the ratio of the complex coefficients of the up and down spin states! (Math in my last post).

I had learned Descriptive Geometry in high school, but never used it since, not as a physics student, not in any job. I haven’t recognized the technical jargon when looking it up now. But picking up a pencil made something bubble up from the depth of subconsciousness. I practice also with triangle and compass, but freehand supports this process better.