In my attempts at Ice Storage Heat Source popularization I have been facing one big challenge: How can you – succinctly, using pictures – answer questions like:

How much energy does the collector harvest?

What’s the contribution of ground?

Why do you need a collector if the monthly performance factor just drops a bit when you turned it off during the Ice Storage Challenge?

The short answer is that the collector (if properly sized in relation to tank and heat pump) provides for about 75% of the ambient energy needed by the heat pump in an average year. Before the ‘Challenge’ in 2015 performance did not drop because the energy in the tank had been filled up to the brim by the collector before. So the collector is not a nice add-on but an essential part of the heat source. The tank is needed to buffer energy for colder periods; otherwise the system would operate like an air heat pump without any storage.

I am calling Data Kraken for help to give me more diagrams.

There are two kinds of energy balances:

1) From the volume of ice and tank temperature the energy still stored in the tank can be calculated. Our tank ‘contains’ about 2.300 kWh of energy when ‘full’. Stored energy changes …

Thus the contribution of ground can be determined by:

2) On the other hand, three heat exchangers are serially connected in the brine circuit: The heat pump’s evaporator, the solar air collector, and the heat exchanger in the tank. .

Both of these energy balances are shown in this diagram. The direction of the arrows indicates energy > 0, and they re in line with the signs used in the diagrams below. 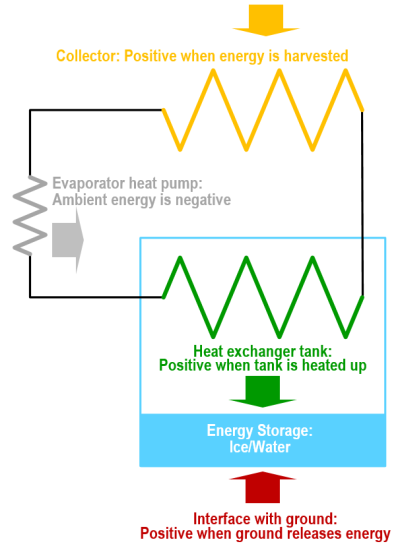 The heat pump is using a combined heat source, made up of tank and collector, so …

The following diagrams show data for the season containing the Ice Storage Challenge: 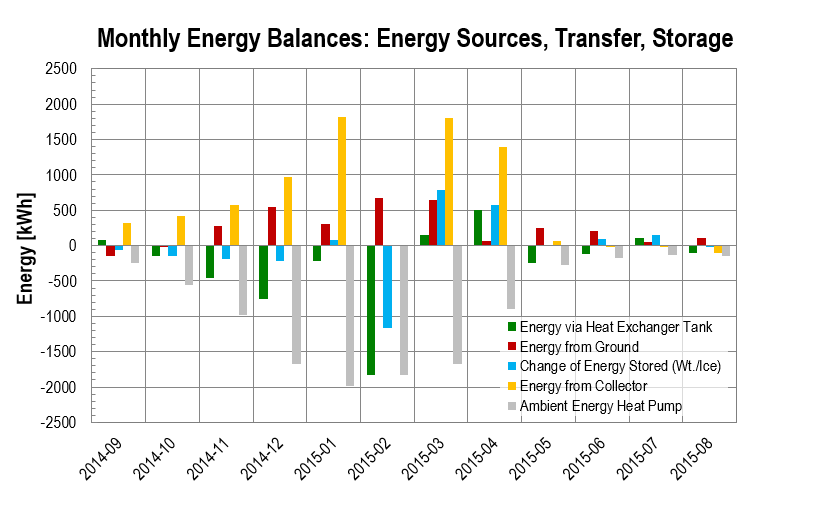 From September to January more and more ambient energy is needed – but also the contribution of the collector increases! The longer the collector is on in parallel with the heat pump, the more energy can be harvested from air (as the temperature difference between air and brine is increased).

As long as there is no ice the temperature of the tank and the brine inlet temperature follow air temperature approximately. But if air temperature drops quickly (e.g. at the end of November 2014), the tank is still rather warm in relation to air and the collector cannot harvest much. Then the energy stored in the tank drops and energy starts to flow from ground to the tank. 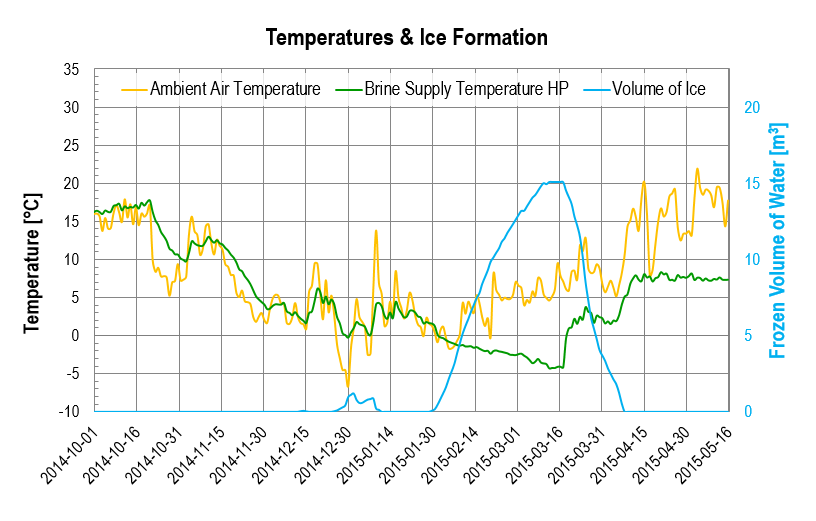 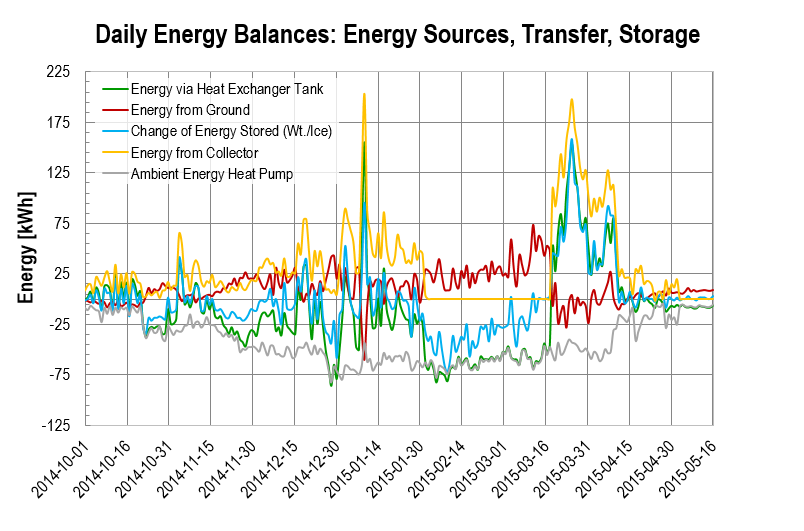 On Jan 10 an anomalous peak in collector energy is visible: Warm winter storm Felix gave us a record harvest exceeding the energy needed by the heat pump! In addition to high ambient temperatures and convection (wind) the tank temperature remained low while energy was used for melting ice.

On February 1, we turned off the collector – and now the stored energy started to decline. Since the collector energy in February is zero, the energy transferred via the heat exchanger is equal to the ambient energy used by the heat pump. Ground provided for about 1/3 of the ambient energy. Near the end of the Ice Storage Challenge (mid of March) the contribution of ground was increasing while the contribution of latent energy became smaller and smaller: Ice hardly grew anymore, allegedly after the ice cube has ‘touched ground’.

Mid of March the collector was turned on again: Again (as during the Felix episode) harvest is high because the tank remains at 0°C. The energy stored in the tank is replenished quickly. Heat transfer with ground is rather small, and thus the heat exchanger energy is about equal to the change in energy stored.

At the beginning of May, we switched to summer mode: The collector is turned off (by the control system) to keep tank temperature at 8°C as long as possible. This temperature is a trade-off between optimizing heat pump performance and keeping some energy for passive cooling. The energy available for cooling is reduced by the slow flow of heat from ground to the tank.