Skip to content
elkement Control and IT, Cyber, Life, Life the Universe and Everything, Science and Technology, Web March 18, 2016April 27, 2021

I published my first post on this blog on March 24, 2012. Back then its title and tagline were:

elkemental Force
Research Notes on Energy, Software, Life, the Universe, and Everything

last November. It seems I have run out of philosophical ideas and said anything I had to say about Life and Work and Culture. Now it’s not Big Ideas that make me publish a new post but my small Big Data. Recent posts on measurement data analysis or on the differential equation of heat transport  are typical for my new editorial policy.

Cartoonist Scott Adams (of Dilbert fame) encourages to look for patterns in one’s life, rather than to interpret and theorize – and to be fooled by biases and fallacies. Following this advice and my new policy, I celebrate my 4th blogging anniversary by crunching this blog’s numbers.

No, this does not mean I will show off the humbling statistics of views provided by WordPress :-) I am rather interested in my own evolution as a blogger. Having raked my virtual Zen garden two years ago I have manually maintained lists of posts in each main category – these are my menu pages. Now I have processed each page’s HTML code automatically to count posts published per month, quarter, or year in each category. All figures in this post are based on all posts excluding reblogs and the current post.

Since I assigned two categories to some posts, I had to pick one primary category to make the height of one column reflect the total posts per month: 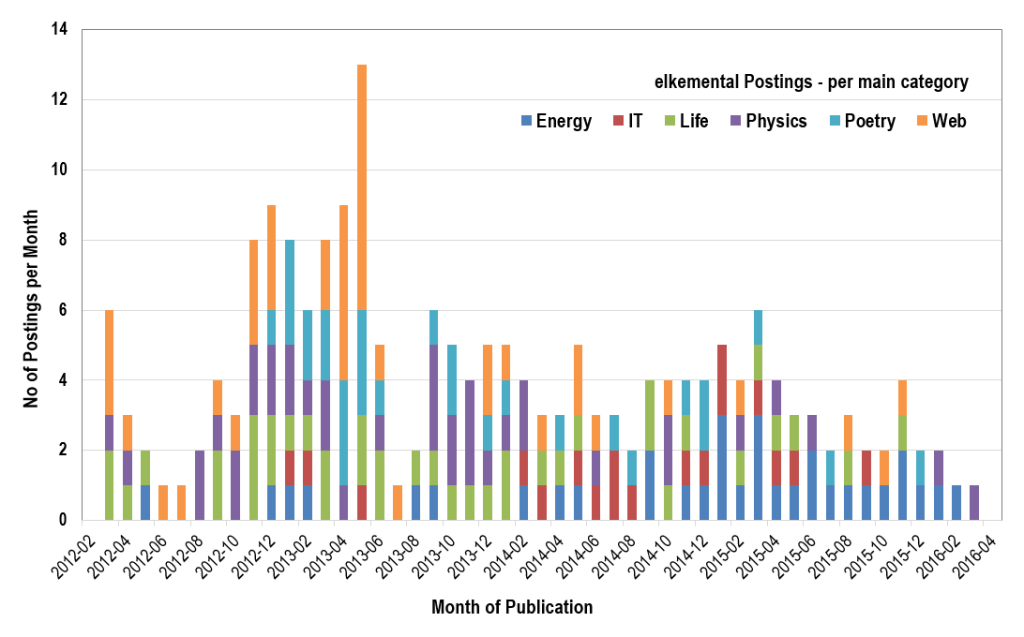 It seems I had too much time in May 2013. Perhaps I needed creative compensation – indulging in Poetry and pop culture (Web), and – as back then I was writing a master thesis.

I had never missed a single month, but there were two summer breaks in 2012 and 2013 with only 1 post per month. It seems Life and Web gradually have been replaced by Energy, and there was a flash of IT in 2014 which I correlate with both nostalgia but also a professional flashback owing to lots of cryptography-induced deadlines.

But I find it hard to see a trend, and I am not sure about the distortion I made by picking one category.

So I rather group by quarter:

… which shows that posts per quarter have reached a low right now in Q1 2016, even when I would add the current posting. Most posts now are based on original calculations or data analysis which take more time to create than search term poetry or my autobiographical vignettes. But maybe my anecdotes and opinionated posts had just been easy to write as I was drawing on ‘content’ I had in mind for years before 2012.

In order to spot my ‘paradigm shifts’ I include duplicates in the next diagram: Each post assigned to two categories is counted twice. Since then the total number does not make sense I just depict relative category counts per quarter:

Ultimate wisdom: Life ends, although Energy is increasing. IT is increasing, too, and was just hidden in the other diagram: Recently it is  often the secondary category in posts about energy systems’ data logging. Physics follows an erratic pattern. Quantum Field Theory was accountable for the maximum at the end of 2013, but then replaced by thermodynamics.

Web is also somewhat constant, but the list of posts shows that the most recent Web posts are on average more technical and less about Web and Culture and Everything. There are exceptions.

Those trends are also visible in yearly overviews. The Decline Of Web seems to be more pronounced – so I tag this post with Web. 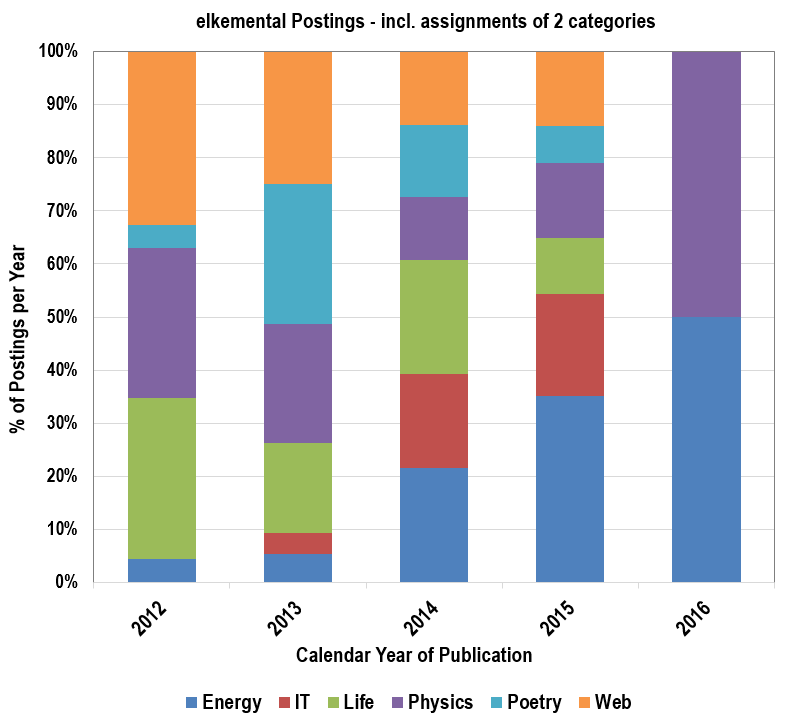 But perhaps I was cheating. Each category was not as stable as the labels in the diagrams’ legends do imply.

My ‘category pages’ are not fully in sync with the true feed of each (WordPress) category.

… and should maybe be called nerdy-web-stuff-and-software-development.

In summary, I like my statistics as it confirms my hunches but there is one exception: There was no Poetry in Q1 2016 and I have to do something about this!

It could be automated even better – without having to maintain category pages by simply using the category feeds or by filtering the full blog feed for categories. I have re-categorized all my posts so that categories matches menu page lists, but I chose to use my lists as

16 thoughts on “Anniversary 4 (4 Me): “Life Ends Despite Increasing Energy””