I have a secondary super-villain identity. People on Google+ called me:
Elke the Ripper or Master of the Scythe. 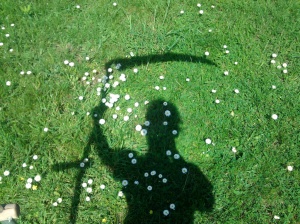 [FAQ] No, I don’t lost a bet. We don’t have a lawn-mower by choice. Yes, we tried the alternatives including a reel lawn-mower. Yes, I really enjoy doing this.

It is utterly exhausting – there is no other outdoor activity in summer that leaves me with the feeling of really having achieved something!

So I was curious if Grim Reaper the Physicist can express this level of exhaustion in numbers.

Just holding a scythe with arms stretched out would not count as ‘work’. Yet I believe that in this case it is the acceleration required to bring the scythe to proper speed that matters; so I will focus on work in terms of physics.

In order to keep this simple, I assume that the weight of the scythe is a few kilos (say: 5kg) concentrated at the end of a weightless pole of 1,5m length. All the kinetic energy is concentrated in this ‘point mass’.

But how fast does a blade need to move in order to cut grass? Or from experience: How fast do I move the scythe?

One sweep with the scythe takes a fraction of second – probably 0,5s. The blade traverses an arc of about 2m.

However, using this speed in further calculations does not make much sense: The scythe has two handles that allow for exerting a torque – the energy goes into acceleration of the scythe.

If an object with mass m is accelerated from a velocity of zero to a peak velocity vmax the kinetic energy acquired is calculated from the maximum velocity: m vmax2 / 2. How exactly the velocity has changed with time does not matter – this is just conservation of energy.

But what is the peak velocity?

For comparison: How fast do lawn-mower blades spin?

This page says: at 3600 revolutions per minute when not under load, dropping to about 3000 when under load. How fast would I have to move the scythe to achieve the same?

Velocity of a rotating body is angular velocity times radius. Angular velocity is 2Pi – a full circle – times the frequency, that is revolutions per time. The radius is the length of the pole that I use as a simplified model.

This would result in the following energy per arc swept. I use only SI units, so the resulting energy is in Joule:

I am assuming that this energy is just consumed (dissipated) to cut the grass; the grass brings the scythe to halt, and it is decelerated to 0m/s again.

Using your typical food-related units:
1 kilocalorie is 4,18kJ, so this amounts to about 133kcal (!!)

That sounds way too much already: Googling typical energy consumptions for various activities I learn that easy work in the garden needs about 100-150kcal kilocalories per half an hour!

If scything were that ‘efficient’ I would put into practice what we always joke about: Offer outdoor management trainings to stressed out IT managers who want to connect with their true selves again through hard work and/or work-out most efficiently. So they would pay us for the option to scythe our grass.

But before I crank down the hypothetical velocity again, I calculate the energy demand per half an hour:

I feel exhausted after half an hour of scything. I pause a few seconds before the next – say 10s – on average. In reality it is probably more like:

I assume a break of 9,5s on average to make the calculation simpler. So this is 1 arc swept per 10 seconds, 6 arcs per minute, and 180 per half an hour. After half on hour I need to take longer break.

So using that lawn-mower-style speed this would result in:

… about five times the daily energy demands of a human being!

Velocity enters the equation quadratically. Assuming now that my peak scything speed is really only a tenth of the speed of a lawn-mower, 47m/2, which is still about 10 times my average speed calculated the beginning, this would result in one hundredth the energy.

A bit more realistic energy per half an hour of scything is then: 239kcal

Just for comparison – to get a feeling for those numbers: Average acceleration is maximum velocity over time. Thus 47m/s would result in:

So my assumed scythe’s acceleration is about 10 times a Ferrari’s!

Now I would need a high-speed camera, determine speed exactly and find a way to calculate actual energy needed for cutting.

Is there some conclusion?

This was just playful guesswork but the general line of reasoning and cross-checking orders of magnitude outlined here is not much different from when I try to get my simulations of our heat pump system right – based on unknown parameters, such as the effect of radiation, the heat conduction of ground, and the impact of convection in the water tank. The art is not so much in gettting numbers exactly right but in determining which parameters matter at all and how sensitive the solution is to a variation of those. In this case it would be crucial to determine peak speed more exactly.

In physics you can say the same thing in different ways – choosing one way over the other can make the problem less complex. As in this case, using total energy is often easier than trying to figure out the evolution of forces or torques with time. 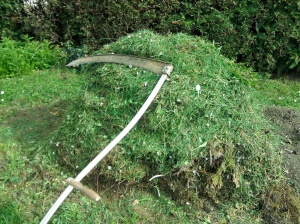 The two images above were taken in early spring – when the ‘lawn’ / meadow was actually still growing significantly. Since we do not water it, the relentless Pannonian sun already started to turn it into a mixture of green and brown patches.

This is how the lawn looks now, one week after latest scything. This is not intended to be beautiful – I wanted to add a realistic picture as I had been asked about the ‘quality’ compared to a lawn-mower. Result: Good enough for me!